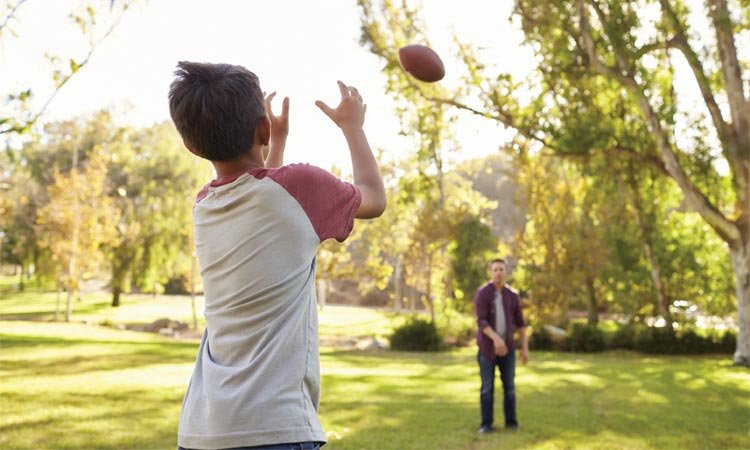 As I was walking one day, I saw a boy and his father playing together in a field, throwing a ball back and forth. At one point, the father held the ball up and motioned to the far end of the field.

The father hadn’t thrown the ball yet, but the boy started running. Behind him, his father wound up for the throw. Then, as the son looked over his shoulder, the father threw the ball down the field, ahead of where his son was. The boy continued running, occasionally looking at the ball as it flew toward him. Then, at the perfect moment, he reached up, jumped, and caught the ball just as it reached him.

Yes, it’s an ordinary story. And yet recently God managed to teach me a lesson, as He so often does, from this unremarkable event.

You see, I was in need of a miracle at the time and was waiting for God to come through for me. I knew He would, but nothing was happening, so I didn’t act. But what my Father needed me to do was to go long.

I had to get started. God had the miracle ready to send, but when He said, “Go long, son!” I stood there twiddling my thumbs. I had faith, but I wasn’t doing my part.

We need to put feet to our faith and start running. That boy ran a ways before his father even started to wind up. And he didn’t stop. He kept running, knowing that his father knew just how far he needed to run, and would come through for him. That boy had no assurance that the ball would reach him, merely a child’s faith.

But it was an inch-perfect pass, landing at just the right time and in just the right place, so that all he had to do was reach out, take a leap of faith, and grasp it with both hands.

The next time I ask for God’s help, I’ll remember that sometimes He wants me to do my part, to “go long.”

Faith is letting down our nets into the transparent deeps at the divine command, not knowing what we shall draw.—François Fénelon (1651–1715)

Trusting God means looking beyond what we can see to what God sees.—Charles Stanley (b. 1932)

David Mizrany is a full-time volunteer and missionary with Helping Hand South Africa.

More in this category: « Keep Calm and Carry On Don’t Worry, Be Happy! »