The Piggie That Built on a Rock 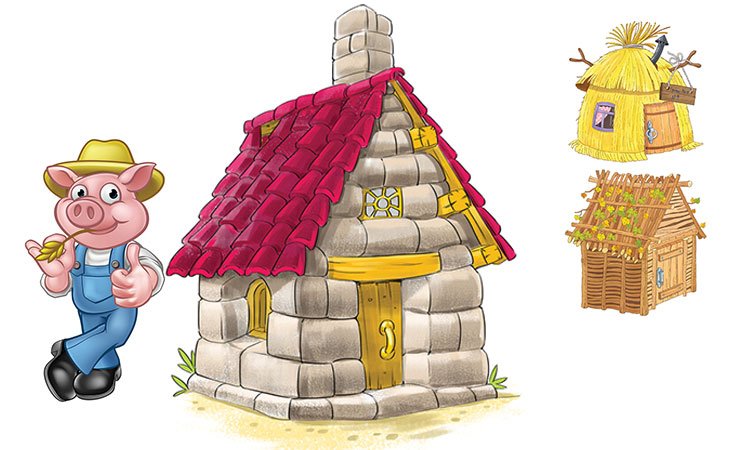 “Not by the hair on my chinny-chin-chin!”

The third pig builds a house of brick. The wolf cannot huff and puff hard enough to blow the house down. He attempts to trick the little pig out of the house, but he’s outsmarted at every turn.

In Matthew 7:24–27 Jesus says, “Anyone who hears and obeys these teachings of mine is like a wise person who built a house on solid rock. Rain poured down, rivers flooded, and winds beat against that house. But it did not fall, because it was built on solid rock. Anyone who hears my teachings and doesn’t obey them is like a foolish person who built a house on sand. The rain poured down, the rivers flooded, and the winds blew and beat against that house. Finally, it fell with a crash.”2

In other words, if your life is anchored in Jesus and grounded in Him, then even through the biggest, toughest difficulties that life can throw at you, your house will stand. You’ll be able to weather that storm because Jesus will be your rock, your stability; He’ll hold you up. But if a house isn’t grounded in Jesus and His Word, but is built on a weak foundation, like sand, then even the smallest difficulty can knock that house, or life, for a loop.

John Piper states the following: “Christianity is not a game; it’s not a therapy. All of its doctrines flow from who God is and what He has done in history. They correspond to hard facts. Christianity is more than facts, but not less. There is faith and hope and love. But these don’t float in the air. They grow like great cedar trees in the rock of God’s truth. Those who will be left standing will be those who have built their houses on the rock of great, objective truth with Jesus Christ as the origin, center, and goal of it all.”3

Adoniram Judson, who lived from 1788 through 1850, is an amazing example of having built his life upon a rock. He was an American missionary who served in Burma for 40 years. But his life wasn’t glorious at all. Adoniram was only 25 when he and his wife went to Burma. During those first years they experienced loneliness and poor health. It was six years before they won their first convert. On top of that, Adoniram was in prison for two years. Talk about a heavy storm beating against one’s house! Then, shortly after he was released from prison, his wife and baby daughter died. It seemed like Adoniram received blow after blow of harsh winds and rain. It was one difficulty and heartrending experience after another. And yet, through it all, Adoniram’s “house” remained standing.

He may not have always felt like it was standing. There were times when he felt defeated and destroyed. But history shows that he was not destroyed and that his life’s work and efforts were worth it. One proof is that when Adoniram began his mission in Burma, he set a goal of translating the Bible into Burmese and founding a church of 100 members. When he died, he left the Burmese Bible, 100 churches, and over 8,000 believers.

I’m frankly amazed at how Adoniram could keep going even after being hit and beaten by so many of life’s storms. And I realize it wasn’t so much about Adoniram—the inner strength he must have had, or his incredible willpower or gumption. It was about what he was relying on to hold him up, the Rock that his life was built on. Adoniram was able to face the storms of life and threatening winds, yet remain standing, because he was grounded in Jesus.

So the question is, where are you building your house? When the storms of life come, and they certainly will, what will be left of it?4

1. “The Three Little Pigs,” a 19th century fairytale
2. CEV
3. Spectacular Sins, and Their Global Purpose in the Glory of Christ, Crossway Books, 2008. p. 57
4. This article was adapted from a podcast on Just1Thing, a Christian character-building website for young people.

More in this category: « The Big Leap Keep Calm and Carry On »