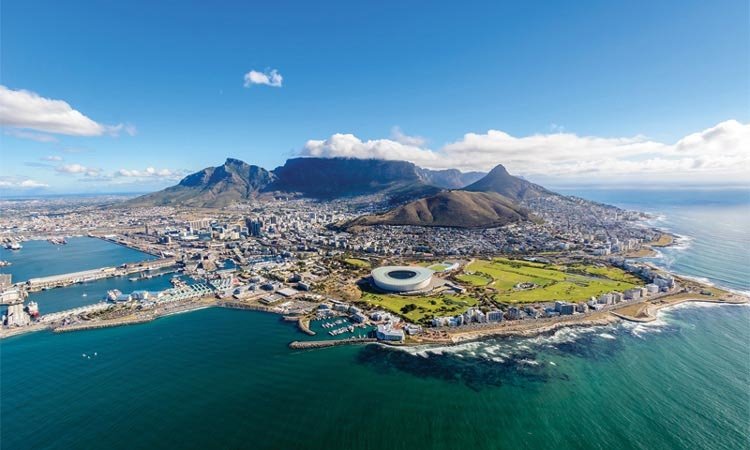 I recently climbed Table Mountain, here in South Africa, and what a wonder it is! A flat-topped mountain smack-dab in the middle of a city, overlooking two oceans, and with a mountain range dubbed “The 12 Apostles” right behind it. It’s over 3,500 feet (1,066 m) high and teeming with gorgeous vegetation, birds, wild animals, rocks and cliffs, but my favorite thing about it is the breathtaking view!

We set out for the climb in the early morning and arrived at the starting point just before dawn. As we walked up, we watched the sun rise and the city begin to wake. We encountered others also making their way to the top, equally determined to take advantage of an early start.

At first, the climb felt grueling. I was out of breath and had to make a few stops to rest and drink water. The rest of the group kept going, and I felt as if I were being left behind. My husband (a Table Mountain veteran) stayed by my side, giving me encouragement and reassurance that I was doing well. A couple of times, we even caught up with the rest of the group at a rest stop before they went on.

With aching limbs and much laughter in good company, we, the slow ones, made it to the top in just under two hours. There it was: the view!

From the top, you can see the whole city of Cape Town, the surrounding mountains, both oceans, valleys, fields and plains beyond the city, and—even farther in the distance—the next mountain range. The sense of being amidst God’s beautiful creation overwhelmed me and I was enthused with a feeling of achievement.

Then I realized, the summit was my goal, and I had to take many steps to get there—over 10,000 according to my pedometer—but there were also psychological steps, like planning, overcoming fears and apathy, and persevering when I didn’t feel like it. These are similar to the steps to reaching personal goals: calculate, plan, execute, and keep moving forward, even when the going gets tough. There will always be the temptation to give up along the way, but with my goal in mind and with the help of like-minded people, my goals become achievable.

Table Mountain isn’t the only mountain there is to climb, just as there are many goals waiting to be achieved and many views waiting to be seen. So, we tackle one at a time, gaining experience along the way. With good company and lots of encouragement, taking it one step at a time, and not giving up, we can all reach our personal “summits.”

Ester Mizrany is a teacher and full-time missionary with Helping Hand in South Africa.

More in this category: « The Mindset Change Teleportation—Or Transformation »