Why Watermelons Are Blue 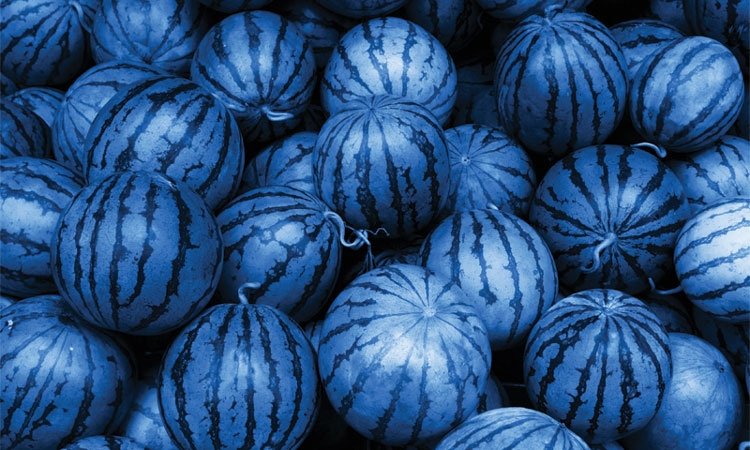 Ever since I was a child, I’ve had a difficult time falling asleep and staying asleep. Over the past several years, I’ve gotten considerably better at both through learning various dos and don’ts. On an average night, though, it still takes me as long as 90 minutes to fall asleep—and that’s usually not because I drank coffee too late in the day or didn’t exercise enough.

My mind seems to have a mind of its own, which definitely does not want to go to sleep—ever. When it is meant to be shutting down for the night, it instead revs up and begins doing something else entirely, from planning to philosophizing.

As I lie there, knowing that I can’t make myself think about nothing, I try to steer my thoughts toward things that are pleasant and not stressful—ideally, things that have as little as possible to do with real life. Eventually my busy thoughts give way to semi-busy thoughts, which give way to entertaining thoughts. Then at last comes the moment I cherish every night, the moment of the completely nonsensical thought.

The internal dialogue will go something like this: Tomorrow I need to reply to Christy first thing. … You’re not supposed to be planning your to-do list now. … That lecture I listened to the other day was fascinating. … No, that’s not going to work. Too interesting. … So, this weekend I’m going out to dinner with a friend. … And that’s why watermelons are blue. I smile, grateful to know that in a few moments I will be sleeping peacefully.

It’s a case of something that seems “wrong” or nonsensical paving the way for something good. In the case of my insomnia, the good—the sleep—doesn’t come in spite of the bizarre, random thoughts, but rather the random heralds the harmonious.

That makes me wonder if there are other ways and times when similar scenarios play out, perhaps without my even noticing the pattern.

We all hear the occasional story of the bizarre turned beautiful on a grand scale—someone meeting the love of their life while they were stuck at an airport due to a weather delay, for instance—but there are also less dramatic, more everyday scenarios. I recently lost something that was really pretty insignificant, but in searching for it I found something else that mattered much more to me, which I hadn’t been able to find for months.

I’ve long believed that some good could be found in every situation, in spite of the bad—that God could somehow make things right again, or at least better again, no matter what. But along with that I’ve had the mindset that getting to the good would be ugly and messy and I wouldn’t enjoy it.

Now I’m starting to find a bit of anticipation and pleasure in getting through the “ugly and messy.” I’m learning to delve into things that could be nasty with the attitude that “this could lead to something wonderful!” That doesn’t turn out to be the case every time, but I have more positive energy and more fun if I hope for the best rather than dread the worst. I’ve found that when I look for the good not only after the “bad” but during it, I sometimes find that the two are tied together, that the “bad” helps bring about the good.

It’s not simply a matter of “praising God anyway,” no matter how bad things get. I’m actually happy when things seem wonky, because you just never know. It could be one of those times when it turns out that the funkiness and the good are in partnership. It could be a “blue watermelon event.”

Every night, when that nonsensical thought I’ve come to love pops into my head, it reminds me that it is more than a theoretical possibility that the weird leads to the lovely. It happens to me just about every night. And now, I have even more reason to smile about it.

We shouldn’t be afraid to embrace whimsy, that nagging idea that life could be magical; it could be special if we were only willing to take a few risks.—Donald Miller (b. 1971)

I encourage everyone to know that God has a plan for their life and that God never makes a mistake even though it seems like He is not listening or paying attention sometimes.—Nick Vujicic (b. 1982)

I was raised to believe that God has a plan for everyone and that seemingly random twists of fate are all a part of His plan.—Ronald Reagan (1911–2004)

More in this category: « Pots and Pans Perceptions »