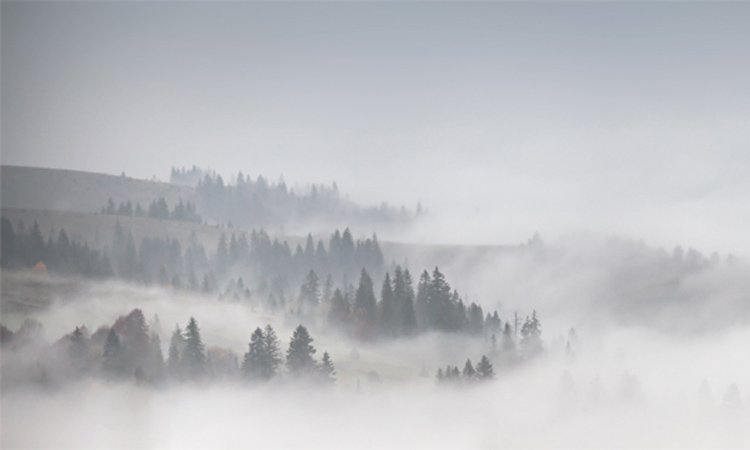 I have such a clear memory of it. I woke up early on a summer morning and looked outside to see only white. I rubbed my eyes, thinking there was something wrong with them, then decided to explore. I stepped out onto the porch and down the steps and was amazed to feel like I was in the middle of a cloud. I walked a few feet and spun around, then I realized that I didn’t know where I was. I was only steps from the porch, but I didn’t know which way it lay.

My panic rose as I realized that my family might not hear me if I cried out. Then I remembered that if I could find my way to the stone path, I’d be able to get back to the house. I bent down and reached into the moist grass, trying to find the stones. As I bent lower and lower, I actually began to see the color of the grass. I could make out my shoes. I could feel the slight incline I was kneeling on and knew I needed to go up.

I crawled along the ground and suddenly there was a stone. As I followed the path, the fog rose higher, so I could see my knees. By the time I reached the porch, I could see my waist. I straightened to my full height and marveled as the fog lifted and the cloud rose to reveal the familiar scene around me.

When I tried to explain to my brothers and sisters about getting lost in a cloud in the front yard, they didn’t understand. Finally, Dad explained that the fog had rolled up that morning from the stream below and cautioned me that if I ever found myself in a thick fog again, I should stay still and hold on to something familiar until it rose. It felt good to finally be understood and to know what I had experienced.

Since then, I’ve sometimes felt that I’m lost in a fog, mentally or emotionally. I lost track of where I was and felt the same panic I felt as a child, the same disorientation, as I tried to figure out what was going on. During those times of confusion, I learned to get down on my knees to ask God for direction. As I did so, the fog would slowly begin to lift. I could recognize something there, a rock of some kind I could base my faith upon. Then I would follow the familiar path to my goal as the fog lifted.

More in this category: « Lonely? Thoughts on the Realities of Life »