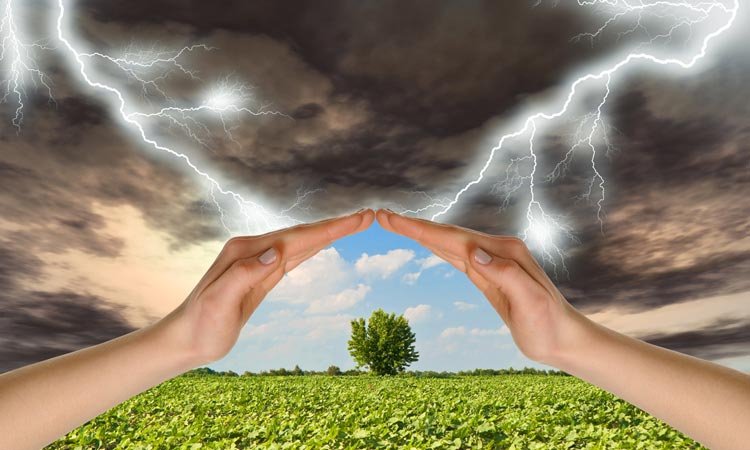 When the world goes to pieces, the best place to be is in the charmed circle of God’s protection. “He who dwells in the secret place of the Most High shall abide under the shadow of the Almighty. I will say of the Lord, ‘He is my refuge and my fortress; my God, in Him I will trust.’ Surely He shall deliver you from the snare of the fowler and from the perilous pestilence. He shall cover you with His feathers, and under His wings you shall take refuge; His truth shall be your shield and buckler. You shall not be afraid of the terror by night, nor of the arrow that flies by day, nor of the pestilence that walks in darkness, nor of the destruction that lays waste at noonday. A thousand may fall at your side, and ten thousand at your right hand; but it shall not come near you.”1

Even if there’s turmoil and confusion all around, you can have inner peace through the Prince of Peace, Jesus Christ.2 He never fails those who trust Him. So that’s the secret: Live close to the Lord, in touch and in tune with Him and in step with His Word. It is His Word that makes you strong spiritually.3

One encouraging passage of Scripture regarding God’s ability to protect and keep those who believe in and trust Him is the story of the harlot Rahab and the ancient city of Jericho. Because Rahab had faith and assisted two spies who were acting as God’s agents, even at great peril to herself, when Jericho was later besieged by an invading army and destroyed, the only part of Jericho’s city walls that didn’t fall was the small section on which Rahab’s house was built. She and her relatives survived and were spared by the conquerors.4

When disaster strikes, whether it’s natural or manmade, those who have been doing their best to live as they know God would have them live may find they receive His supernatural protection. “The Lord knows how to deliver the godly out of temptations.”5 That doesn’t mean that He won’t ever allow them to be harmed. He promises deliverance, but sometimes He knows that the best and most loving form of deliverance is to end their suffering by taking them home to heaven. So if you’ve received Jesus as your Savior, the “worst” thing that can happen to you is that you die and go to heaven that much sooner. You really don’t have anything to worry about, because either way, whether here or there, you’re in His loving care.

And remember, whenever anything bad happens to those who love God, He can and wants to bring about some good through it. “All things work together for good to those who love God.”6 Don’t worry when times of trouble and testing come, thinking that God doesn’t love you or that He’s finished with you. What you feel is God’s tender hand upon you, using the situation to make you into the person He knows you can be, or working other things in your favor. As hard as it may be to see the good that will come out of it, that’s His goal and His promise to you.

You’re in His hands, so “be confident of this very thing, that He who has begun a good work in you will complete it until the day of Jesus Christ.”7 These tests are only for a time, and meanwhile you are safe with Him!

All things work together for good to those who love God

After the darkest night in world history, we are going to have the brightest dawn. The fast approaching night is going to be the nightmare of the great tribulation (a 3 ½-year period during which the world will be ruled by an iron-fisted dictator known as the Antichrist), and the dawn, the coming of Christ. Things have got to get worse before they can get better, but in spite of the horrors of the growing darkness of this world, we know that it’s all going to work out right in the end. The darkest hour is just before dawn, and the faster it gets worse, the sooner it’s going to get better!

We have to go through a dark place of trials and tribulations, but then we’re going to come out into the sunshine on the other side and all of these things will be blotted out like an evil dream! One of these days Jesus is going to stop the world and we’re going to get off, away from all this suffering and confusion and into the peace and quiet and beauty and love and wonder of that wonderland beyond in heavenly places with Him! Just a little longer, then dawns His glorious morn!

More in this category: « Troubled, Yet Not Distressed Feeling the Squeeze »