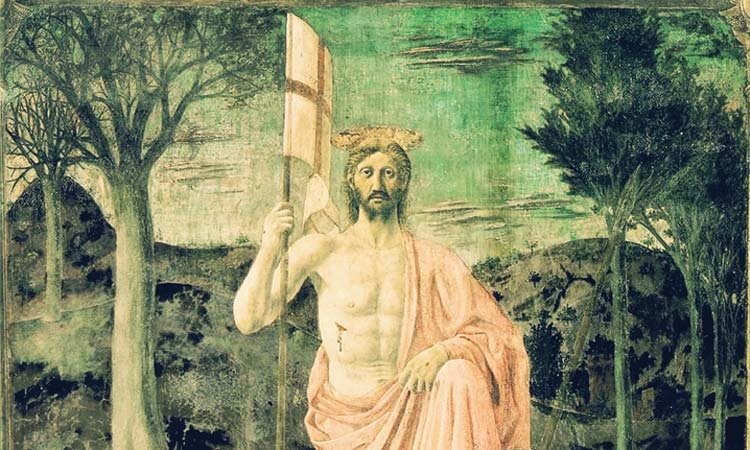 The other night I watched a fascinating documentary about the famous fresco The Resurrection, by Piero della Francesca, painted around 1463 in Tuscany, Italy. Jesus is in the center of the composition, portrayed at the moment of His resurrection. He is seen rising above four soldiers sleeping at His tomb, illustrating the difference between the human and divine spheres.

The symbolism continues in the background landscape. On one side of Jesus, we see old, dead, leafless trees; on the other side, the trees are young and flourishing, reminding us that Christ’s resurrection from the dead is an affirmation of eternal life for all who place their hope in Him—“Because I live, you will live also.”1 Aldous Huxley described the masterpiece as “the greatest picture in the world,” but it was the story of its preservation during the Second World War that captured my attention.

Toward the end of World War II, the Allies were fighting to rid Tuscany of the German occupation. Some British forces arrived on the hills overlooking the town of Sansepolcro, where the building housing The Resurrection is found, and orders were to begin shelling at once.

At this point, British artillery officer Tony Clarke remembered having read Huxley’s 1925 essay describing the painting, and he faced a dilemma. In the end, the realization that the painting he had read about was located in the town below caused the art-lover to go against the orders he’d received—risking court-martial—by holding back his troops from firing.

As it turned out, the German occupiers had already left Sansepolcro and the British troops were able to peacefully enter the following day. Both the town and the painting survived unscathed, owing their narrow escape to Tony Clarke’s determination and a line in a book. For having saved their town from destruction, the appreciative residents of Sansepolcro later named a street after him.

I don’t know if the officer was a believer, nor Huxley, the satirical writer. Still, their words and actions helped keep this portrayal of the resurrection of Jesus as a testimony for generations to come. To me, this is a vivid reminder of divine intervention in the most unlikely of circumstances. Just a few words remembered at the right time can be used by God to answer the prayers of His children in need of protection.

Marie Boisjoly is French Canadian and has been involved in Christian community services for 45 years. She is currently living in Mexico with her husband. She is a laughter therapist and director of “Coloreando el Mundo” (Coloring the World), an interactive clown and puppet show. She is also a distributor of educational and motivational products.

More in this category: « The Final Straw God’s Invitation »