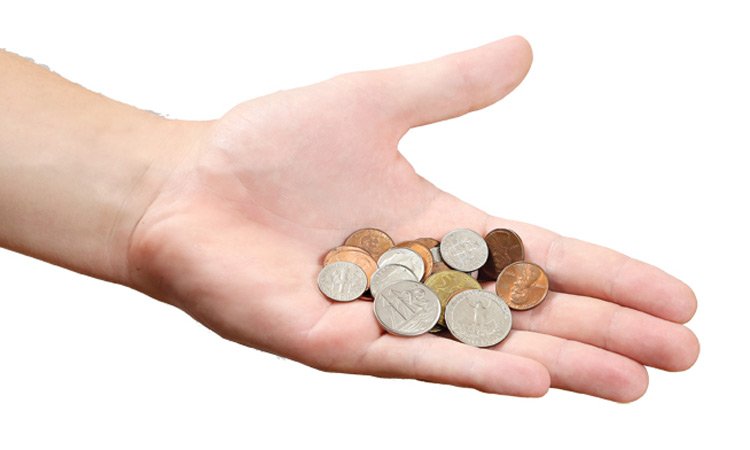 Wow, that’s a lot of money, I thought.

I walk through my neighborhood for errands and exercise, and I’ll often spot coins on the sidewalk or street, which I pick up.

The coins are usually pennies, but I’m not one to turn down money, even if it’s pennies. Occasionally I’ll find a nickel or a dime. But today, while taking a route I’d never been on before, I’d come across quite a few coins—31 cents in all. It felt like I’d hit the jackpot.

The next day I did my weekly shopping early, which was unusual for me. Standing in the checkout line, unloading my cart, I noticed a man behind me in line. All he had in his cart was a carton of eggs.

After I paid and was bagging my groceries, the man gave the cashier a handful of change for his eggs. She patiently counted it out, and I heard her say, “I’m afraid you’re 31 cents short.”

As it turns out, I just happened to have those 31 cents! I dug in my pocket, gave the cashier the balance needed, and the man had his eggs. He gave me a shy smile and nod as he left, and I said a few parting words to him. And as I walked home, I thought about God’s foresight and wonderful ways.

I’m very much a creature of habit; I do certain things at certain times and have certain places I walk. But I’d broken my routine in walking a new route, where 31 cents was waiting for me. Next, I went shopping at an unusual time, but it was God’s perfect time for me to be able to help the man behind me with just the amount of money he needed. The Lord’s foresight and behind-the-scenes planning of the smallest details of our lives is just amazing!

I would have paid the few extra cents for the man’s eggs whether I’d found that change or not. I’m sure God knew that, but it was as if He were saying, Here, I’m paying you back in advance for what you will give for the eggs anyway. In this case, it was only 31 cents, a seemingly insignificant amount, but God knows what His children will go through, He loves them and cares for them, and He supplies for the needy and rewards the giver.

Frank Steele is an editor in the Dallas area of the USA.

More in this category: « God Isn’t an Elephant The Unusual CEO »