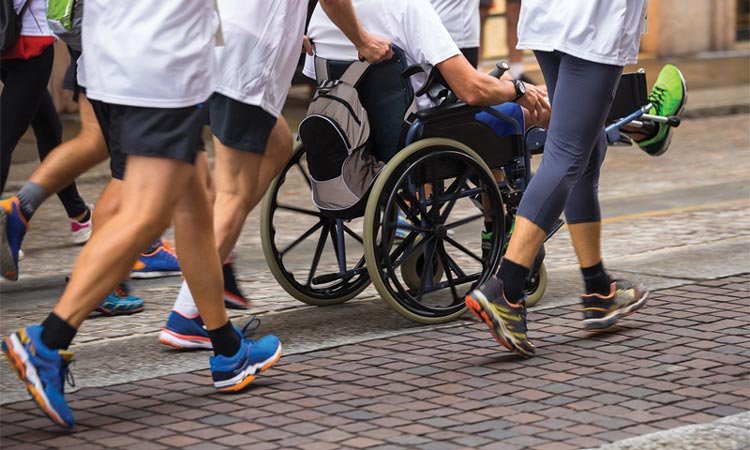 We often hear our life of faith compared to running a race or being on a journey. Countless songs, books, and sermons are based on those concepts. As a runner, I find inspiration in the verse “run with endurance the race that is set before us … looking unto Jesus.”1 But recently it came alive to me from a whole new perspective.

I heard a story about a young boy who was paralyzed and unable to move, except for his head. Clearly, it was hopeless for him to try to do anything “sporty.” But he didn’t resign himself. When he heard of a 5 km run behing hosted as a fundraiser for a friend who also had become paralyzed through a tragic accident, he had a bold idea. With the assistance of technology that enables him to type messages using his eyes and head, he told his father, “I want to run in that race.”

Instead of pointing out the impossibility of the plan, his father made a cart that his son could lie in and pulled it the entire 5 km. At the end of the race, his son typed another message: “This is the first time I don’t feel handicapped.” And so they did it again. And again. And again!

To date, this father has competed with his son in over 300 races—including marathons and triathlons. He runs, swims, and cycles, pulling, pushing, and carrying his son every single step of the way. Why? Simply because he loves his son and wants him to be happy. The son didn’t do anything particular to deserve such love. He’s the son, and that’s all that matters.

We’re the sons and daughters of our heavenly Father, which means we don’t have to push on alone when we’re weary. We can fall into His arms, and He will carry us. That’s what “I will never leave you nor forsake you”2 means.

No matter the mess we’re in, or the troubles we face, His love towards us never wavers. He is always there, ready to help us reach each goal, and one day, we’ll cross the ultimate finish line together.

More in this category: « The Unusual CEO Meet the CEO »