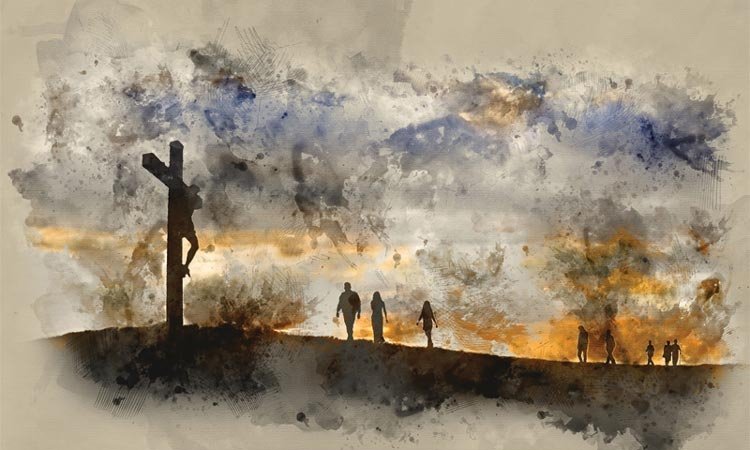 When the time was right, God sent his Son, and a woman gave birth to him. His Son obeyed the Law, so he could set us free from the Law, and we could become God’s children.1

God sent His Son into the world at a specific time and place to live as a human being, to die on a cross, and to be raised from the dead to redeem fallen humankind, so that humanity would have the opportunity to enter into His kingdom and into a special relationship with Him.

The four Gospels tell this story—the story of a unique human being, a Galilean Jew, a person who in many ways was very much like everyone else who has ever been born. At the same time, He was very different from anyone who has ever lived.

The Gospels tell us what made Jesus different. They teach us that He came into the world to lay down His life for humankind, and how through His death and resurrection humanity was able to enter into a new relationship with God. Jesus didn’t come to teach people how to be good; He came to give them the power to be good through the supreme sacrifice He made for us all. There is no other story as important as this one, because how people respond to this unique individual determines their destiny for eternity.2 It’s through this story that we understand the great gift that is offered to us: the gift of becoming a child of our Father in heaven, the means to become a part of His family, and the wonder of living with Him forever.

Jesus lived over two millennia ago, and the Gospels were written a few decades after His death and resurrection by believers of that day. Their goal in writing Jesus’ story was to preserve it so that it could be shared over and over. They wrote so that others would believe,4 and they were successful. There has been an unbroken line of Christians from their day until ours. Two millennia later, we read the same Gospel as did the first readers, and it has the power to transform our lives just as it did theirs.

The Gospels were not the first writings about Jesus. The apostle Paul’s letters are believed to have been written between 49–67 AD, which means some of them were most likely in circulation before the Gospels were written. Some of the other Epistles written in the early 60s AD could have predated the Gospels as well. The Epistles don’t tell a great deal about the life of Jesus, most likely because the authors were writing to believers who already knew something of His life. As was the general custom of the day, the stories and teachings of Jesus would have been circulated orally. The original witnesses, those who knew Him, would have told others the story of His life, describing His miracles, retelling His parables, and sharing other details of His life.

The time between Jesus’ death and resurrection (c. AD 33) and the first of Paul’s Epistles was probably about fifteen years. The first Gospels were written about thirty years after Christ’s death. From what the authors of the Epistles wrote, it’s clear that what they communicated in their writings corresponded with what the Gospel writers later recorded.

The Epistles tell us that Jesus was a descendant of David,5 a Jew raised under the Mosaic law,6 gentle and meek,7 sinless,8 tempted,9 and righteous.10 We also learn that He experienced hostility,11 was betrayed,12 suffered without resisting,13 was crucified,14 and rose from the dead.15

The Gospels focus on the time of Jesus’ ministry. Two of the Gospels give an account of His birth, and one speaks briefly of an event from His childhood when He was about twelve years old. Beyond that, we know almost no specific details about His life until He was baptized by John the Baptist. His pre-ministry life wasn’t the focus or purpose of the Gospel writers. Instead, they speak about what Jesus said and did during the public era of His life, the message He proclaimed, and the manner in which He proclaimed it. They tell us of His actions, miracles He performed, stories He told, the manner of His death, and His rising from the dead. They teach us that He was God’s only begotten Son, the only person who was both God and man, and that His purpose for taking on human form was to make it possible for us to live with God forever. In short, the Gospels’ main purpose is to share the good news that salvation is available through Jesus Christ.

The Gospels also teach believers about the relationship we enter into when we become children of God. They lay the foundation for living as the new creations we become through salvation and receiving the Spirit of God within us. The Gospels impart information which can affect our lives for eternity, help us to develop a worldview built on the foundation of truth, and act as spiritual, moral, and ethical guideposts on the journey of our lives.

A fuller understanding of what the Gospels teach can bring us into a richer relationship with God. If we can grasp the deeper concepts of what Jesus said and did, of His parables, His sermons, His miracles, if we can see them through the eyes of the first eyewitnesses in the milieu of first-century Palestine, then we can see more of the depth and beauty of His message. This can result in a fuller understanding of Jesus’ life, a more profound appreciation for the “wealth and wisdom and knowledge of God,”16 and ultimately a deeper faith.

The Gospels provide foundational principles which act as guidelines for leading a meaningful life and making choices and decisions based on eternal truths given by our Savior. Knowledge of the Gospels and what they teach is vital for living a God-centered life, which leads to joy in this life as well as the next.

I’ve always loved the Gospels, but studying them more thoroughly these past years has given me a greater appreciation for their depth, beauty, and the life-changing power they possess. Spending more time reading them has enriched my life in numerous ways. They have helped strengthen my understanding, my faith, and my connection with God.

This article is adapted from the introduction to his series of posts on Jesus’ life and message, which can be found here.

More in this category: « Try Me When Jesus Showed Up »