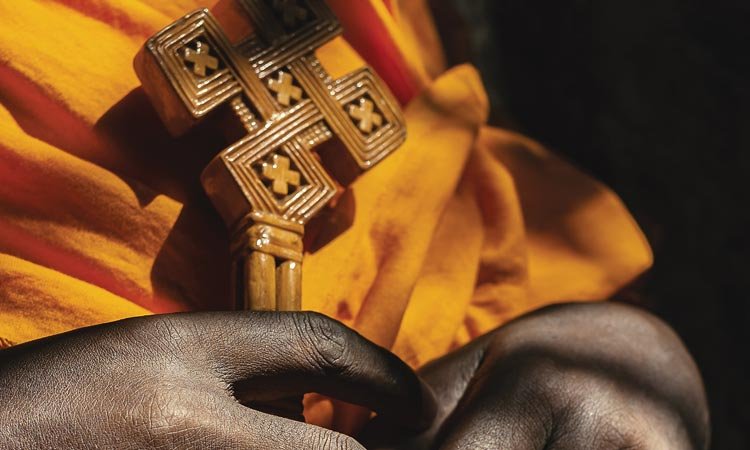 I could never forget the day of the operation, when I was only seven. That was when I became a royal eunuch, destined to serve in the palace of the kings and queens of Ethiopia. I would never have my own family, never be looked at as “normal”—and I would always have to abide by special rules, and would not be allowed to do the things that normal people do.

Over the years, I learned how to serve in the royal household. I was taught calculation, writing, and geography, which awoke in me a fascination for other people and territories. I found out that eunuchs had served the pharaohs in Egypt, the emperors in China, and the rajas in India. If you were looking for eunuchs, you had only to look for the seat of power. They would never be far away.

When Queen Candace needed someone to oversee her foreign trade, I was chosen, given my knowledge of other cultures. I was happy to serve in this capacity, but I wanted a family to belong to. I thought, There must be a place where I can be at home, where I will be accepted just as I am.

When affairs of state took me to Jerusalem, I stayed longer than strictly necessary because I was interested in the Jewish religion. I found out all I could, and even managed to obtain a copy of their scriptures. I was keen to visit the temple but was stopped at the entrance.

“Why can’t I go in?” I asked the temple guard. “Don’t you know I am a member of a royal household on an important diplomatic mission?”

“Says who?” I challenged him.

I was struck by the injustice of my situation. The operation that had rendered me a eunuch hadn’t been my choice, yet I was rejected. Certainly this wasn’t a religious community that I could be a part of.

Yet I was still intrigued by the God of Israel. So in the chariot, on the long way home, I continued reading the scrolls, wondering what they meant. It was on the desert road out of Jerusalem that I noticed a bearded Jewish man by the roadside.

I was reading out loud, and he must have realized that my scroll contained the teachings of Isaiah, a Jewish prophet. He asked me, “Do you understand what you are reading?” I had the chariot stop, and we looked at each other with curiosity.

I replied earnestly. “How can I, unless someone helps me understand? I will give you a ride if you can explain this to me.”

I read the passage: “He was led like a lamb to the slaughter, like a sheep before his shearers is dumb. He did not open his mouth. Justice was denied him. He has been cut off from the land of the living. Who is going to declare his posterity?”

This reminded me of my own fate in life—no posterity, also cut off. “Tell me, who is the prophet talking about? Himself? Or someone else?”

Philip proceeded to explain how the predictions from the scrolls had come true, about how he had met Jesus of Nazareth and followed Him. How Jesus had given His life for all people by allowing Himself to be crucified, only weeks earlier, and how on the third day He had risen from the dead.

I was amazed, but hesitant, as I could not forget the condemning words I had read earlier. Then Philip showed me something else within the same scroll: “This is what the Lord says: I will bless those eunuchs who … choose to do what pleases me and commit their lives to me. I will give them—within the walls of my house—a memorial and a name far greater than sons and daughters could give.”2

Just then I noticed that we were passing an oasis with a small lake. Quickly, I turned to my new teacher: “What would prevent me from getting baptized, right here and now?” I was eager for the cleaning ritual of baptism.

Philip responded, “If you believe with all your heart, you may.”

After Philip had prayed over me and baptized me, I felt renewed! Changed! I wanted to thank him, but suddenly he was nowhere in sight. Where did he go?

Daniel Benjamin accepted Jesus at the age of 16 in Europe and has tried to follow in Christ’s footsteps ever since, in China, Hong Kong, Korea and Singapore. He currently lives in Southeast Asia, where he preaches in small local churches and leads a cell group of young believers.

More in this category: « The Story to End the Excuses The Father and the Lost Sons »