Martha Gets a Makeover 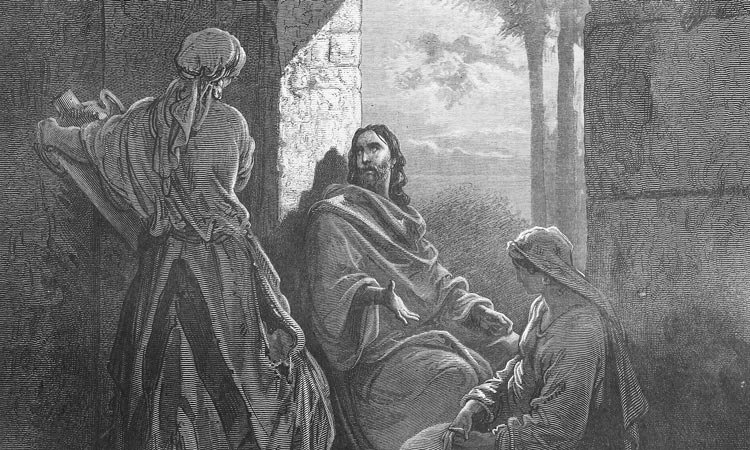 Have you ever felt unfairly characterized by others? Perhaps you’ve been in a situation where someone interacts with you on the basis of what they think they “know” about you (meaning, what they’ve heard about you here and there), without knowing or understanding the real you—maybe without having ever met or spoken with you before.

I sometimes feel that people tend to jump to negative conclusions about Martha, the sister of Mary, based on the account of the sisters’ interactions with Jesus in Luke 10.

Jesus … came to a village where a woman named Martha opened her home to him. She had a sister called Mary, who sat at the Lord’s feet listening to what he said. But Martha was distracted by all the preparations that had to be made.
She came to him and asked, “Lord, don’t you care that my sister has left me to do the work by myself? Tell her to help me!”
“Martha, Martha,” the Lord answered, “you are worried and upset about many things, but few things are needed—or indeed only one. Mary has chosen what is better, and it will not be taken away from her.”1

There’s a vital lesson to be learned from Mary’s actions in this story. It is extremely difficult to differentiate between the “best things” and the “good things”—and then to make the decision to let go of something good while you reach for what is best. So learning to be like Mary is a worthy goal.

But there’s another story about Martha in John 11, and this one shows us some of Martha’s strengths.

John 11 is the chapter about Lazarus, the brother of Mary and Martha. Jesus was evidently close to the three siblings and when Lazarus became ill, his sisters sent word to Jesus, hoping that He would visit and heal Lazarus before his health got any worse.

Instead, the opposite happens. Jesus stays where He is. Lazarus dies. And then Jesus goes to Bethany, Lazarus’ hometown.

When Jesus told the disciples that Lazarus was dead, He said: “Lazarus has died, and for your sake I am glad that I was not there, so that you may believe.”2

As Jesus approached Bethany, Martha went out to meet Him. When she reaches Jesus, she says:

“Lord, if you had been here, my brother would not have died. But even now I know that whatever you ask from God, God will give you.”
Jesus said to her, “Your brother will rise again.”
Martha said to him, “I know that he will rise again in the resurrection on the last day.”
Jesus said to her, “I am the resurrection and the life. Whoever believes in me, though he die, yet shall he live, and everyone who lives and believes in me shall never die. Do you believe this?”
She said to him, “Yes, Lord; I believe that you are the Christ, the Son of God, who is coming into the world.”3

These statements show that Martha was a woman of strong faith. She must have been in awful anguish about the death of her brother, not to mention probably bewildered as to why Jesus didn’t come to Bethany when they first asked. Also, consider that Jesus doesn’t straight-out tell her, “I’m going to raise your brother from the dead today!” He doesn’t explain to her what He meant when He said “Everyone who lives and believes in Me shall never die.”

In spite of not knowing all the details or what Jesus is going to ask His Father for, she trusts that Jesus will act in a way that’s for their good. She says, “I know that whatever you ask from God, God will give you. … I believe that you are the Christ, the Son of God.”

Sure enough, Lazarus (who had been dead for four days) gets up and walks out of his tomb! It’s an incredible miracle and results in many more people believing in Jesus.

There’s a lot in these two chapters to ponder and reflect on. But in relation to the comparisons between Mary and Martha specifically, I find myself thinking along the following lines:

Everyone has strengths, and everyone has flaws. We all have things we’re proud of and like about ourselves; things we feel are “just the way we are”; and things that frustrate us, or that we’re trying to change. But nobody wants to be characterized by one of their blunders, or to be permanently labeled based on some “flaw” or “that time” they messed up. It’s unfair.

Instead of remembering Martha as the sister who “didn’t choose the best part” and “was busy with serving,” why not give our frame of reference a makeover and also remember Martha as the woman who believed and trusted in Jesus in the face of enormous personal loss.

I think it would be great to be a mixture of both Mary and Martha: hardworking, industrious, trusting, building my faith, sticking to my convictions, and doing my best to choose the “one thing that is needful” and to make decisions that will truly count in the long term.

This article was adapted from a podcast on Just1Thing, a Christian character-building website for young people.

More in this category: « Make Me a Cake