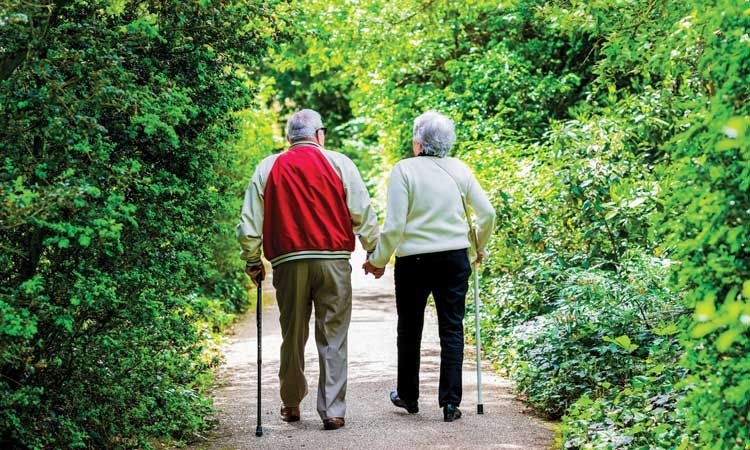 My dad lived until he was 101, my mom until she was 99, and they were married for over 75 years! They survived two world wars and had nine children, though the twins, who were born right after World War II, went back to heaven at birth. They had 19 grandchildren and 19 great grandchildren.

As they got older and weaker, everybody who knew them was amazed at how well they kept going. They lived in their own home with the help of an aide, and my brothers and sisters who did the shopping, mowed the lawn, etc., until they moved to a retirement home in their last months. They had a beautiful statue of Jesus’ mother Mary built into the front wall of their house, and on the entrance door, my dad, who was a medical doctor, had Moses’ rod with the snake embroidered in it.

In a veranda on the back of the house, they had a colorful stone mosaic inlaid into the wall, depicting the first miracle of Jesus, when He turned water into wine. My parents used to drink wine every evening until the last few years. They lived in one of the best wine areas along the Rhine. They’d go to the vintner with family and friends to buy and taste wines. Everyone would get a little glass, taste the wine, and try to guess which area and year it was from, which type of grape, and as many details as they could without seeing the label.

When my dad retired, he began studying history. He said he had to do something to keep his brain functioning. He collected coins and stamps from the Vatican, so he decided to study the history of the popes. He also worked every day in his garden. He used to say, “If it hadn’t been for my garden, I’d have been dead a long time ago.” My mother went for daily walks with her walker, and she read books every day.

One time, a close friend of our family asked her, “With such a big family, you must face a lot of problems. How do you handle them?” My mother replied, “At home I have a chest of drawers. One drawer I call my ‘tolerance drawer.’ If a problem comes up, I just stick it into that drawer and move on.” Her friend said, “But after some time that drawer is full, isn’t it? Then what do you do?” Her reply, “It always settles so that there is room for more.”

It was a lot of work for my mother to raise seven kids—including five rowdy boys—and deal with the crazy things some of us did, but I can’t remember a single time she yelled at us. Our parents were thrifty. We would “inherit” lederhosen down from one brother to the next. And we wouldn’t waste food.

My parents believed in Jesus all their lives, and He helped them survive wars, hardships, and deprivation. My dad always gave God the credit. “It’s just His grace!” he’d say.

A few years ago, I asked them if there was anything in their lives that they would have liked to have been different. Both of them immediately answered, “Nothing!” To which my dad added, “We have seven children who get along with each other. What more could we want?” My parents love kids! When my wife and I adopted an orphaned Congolese baby, at first some of my siblings rejected the idea, but my parents immediately accepted her.

My parents loved each other a lot. Their last wish in life was that when one goes, the other can follow soon after. And that’s exactly what happened, three weeks apart. They also wished that people wouldn’t spend a lot of money on wreathes and flowers for their grave. “Why would you?” they asked. “We’ll be in heaven! We won’t need those flowers.” Instead of buying flowers, people donated to support a hospital in Bethlehem and our school project in Congo. I remember my dad saying many years ago, “My suitcase is packed. I’m ready to go.”

Although it wasn’t easy for them to let one of their sons leave home to be a missionary, they were eventually happy about it and supported me in my calling. I’m sure their prayers helped me out of many a messy situation.

People admired how they kept smiling and making jokes all the time. My dad loved to tell jokes, one after another, even if he’d told them to you before. After all, he’d lived all his life in Mainz, the birthplace of Gutenberg, and a city famous in Germany for its humor.

In his last years, I noticed how difficult it was for him to put on his jacket, but when I tried to help him he said, “No thanks, I need to do it myself.” It made me want to never give up either.

The Bible says, “My child, never forget the things I have taught you. Store my commands in your heart.If you do this, you will live many years, and your life will be satisfying.”1 That’s certainly proven true for my parents.

W.P. Schmidt is a missionary in Europe and Africa.

More in this category: « Keeping the Spark A Yearly Appointment »