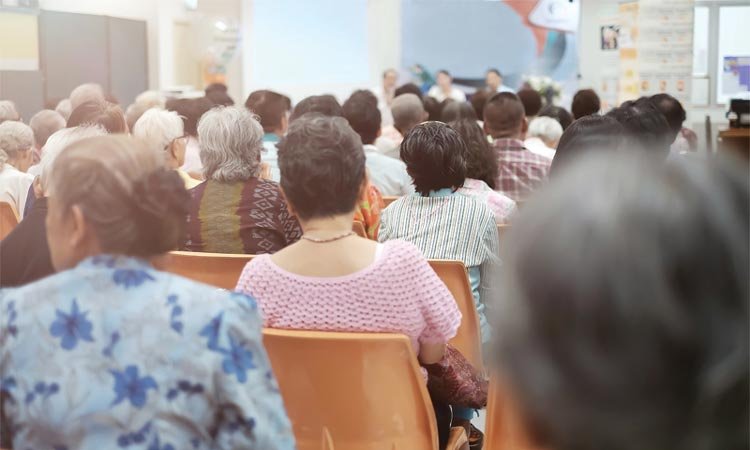 You wouldn’t think he was speaking to a gathering of elderly people, some in wheelchairs, some unable to talk, others afflicted by dementia or Alzheimer’s.

His hands gesticulating in the air, his voice passionately describing some deep concept, then the blackboard and the chalk: “Who can tell me what peace means? You, Alberto, yes, tell me and I’ll write it down. Wonderful! Come on, everyone, we’ll send this to the local newspaper!”

Ferruccio had already been working for years in this home for the elderly when I first met him. He was in charge of recreational activities, but basically he was a motivator, especially for anyone who had a chance to see him in action.

Passion, empathy, encouragement, care, and respect till the end—these are some of the values he embodied till the day he retired, just a few months ago. I learned so much from his example, the way he spoke. No matter how in a hurry he was, he always stopped to answer anyone calling him from a distant wheelchair or stooped down to wipe spilled food. He placed enormous value on the individual.

Every Wednesday, he would gather a group of senior citizens together and discuss current events. Then the group would write letters to local politicians and officials or the children at the village school or a group of Bosnian refugees. Like magic, he was able to pull words from the most seemingly uninterested old man and steal a smile from the woman in a wheelchair who had suffered a stroke and couldn’t talk anymore but had so much to say, all trapped inside.

During what became known as “Wednesday Meetings,” much was said, discussed, proposed. The participants wrote a book dedicated to the town, and even the local press often reported on their discussion topics.

When it’s over, I want to say:
all my life I was a bride married to amazement.
I was the bridegroom, taking the world into my arms.

When it is over, I don’t want to wonder
if I have made of my life something particular, and real.
I don’t want to find myself sighing and frightened, or full of argument.

More in this category: « The Seasons of Life Appreciating Aging »