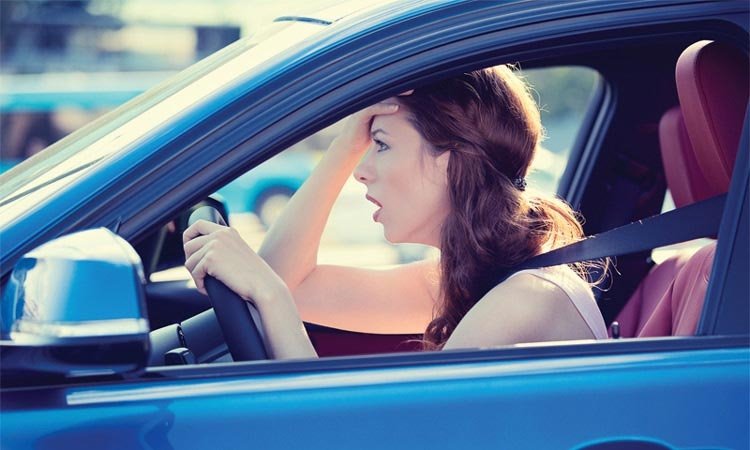 Hearing the crunch of metal against metal as I backed out of my parking spot almost made my heart stop. I was in a hurry and had quickly scanned the parking lot before climbing behind the wheel, but somehow I had overlooked a pick-up that was parked in an unusual place.

I quickly got out of the car to examine the damage and found a nasty crack and dent on my bumper, plus a broken tail light on the pick-up. I scribbled an apology and my phone number on a piece of paper, which I stuck under the windshield wiper of the other car. I would have to deal with this incident once I got back home. With ruffled nerves I drove out the gate.

I had planned to beat rush hour, but as I reached the main road, I realized to my dismay that traffic had already been building up, which meant I would be late for an important meeting. I impatiently drummed on the steering wheel as the traffic crawled along the congested two-lane road.

I felt irritated about the incident at the parking lot and kept replaying it in my mind, trying to figure out how I could have overlooked the parked vehicle. The day had only just begun and my stomach was already in knots when a minivan cut in the line right in front of me. I rolled down my window and shouted an angry rebuke. So much for Christian graces, I thought. Actually, I didn’t feel any grace for the day, which had started off on the wrong foot.

Sitting in traffic gave me time to think and reflect on my morning routines of recent weeks, and I realized that my usual moments with God had been squeezed out because of an increased workload and tighter schedule. It seemed that since then I had become easily irritated and unusually short-tempered. Right there, as the traffic slowly cleared, I committed to getting back my moments of devotions in the morning.

The next week’s schedule was packed, and glancing over my agenda, it didn’t seem that there was much of a margin for anything but work. To weather the workload, I surely would need an extra amount of endurance and patience. I needed a plan.

I decided to set my alarm for half an hour earlier and put together a variety of devotional material and a blank notebook with a pen to keep in the living room for my early morning touch-base-with-God time. I knew that waking up early was going to be a sacrifice, as I treasure each minute of sleep, but I was determined to give this new commitment a try.

When my alarm rang the first morning, I mustered up the energy to crawl out of bed and sleepwalked to the living room, where I settled into a corner of the couch. It was still dark outside, but the first birds’ crystal clear song began to announce the soon-coming sunrise. Their song sounded like praise to God and inspired me to likewise get going with counting my blessings.

As the first timid sunrays crept into the room, I felt more awake and took up my daily devotional book to read the day’s passage. Inspired by the text, which happened to be almost tailor-made counsel for my busy week ahead, I copied a paragraph into my notebook. I then prayed for all the aspects of my to-do list and spent some time meditating on the answered prayers of the previous week. After the half hour was over, I felt refreshed and ready to face the day.

As I started keeping my half-hour appointments with God, it wasn’t the absence of problems, setbacks, or snags that made my work a success, but the way I reacted to them, which helped to smooth rough edges, preserve my nerves—and, I’m sure, made me a more pleasant person to be around. My moments with God in the morning have once again become a habit. This first appointment of the day has given me strength to weather the storms of life, to keep the peace, to have more clarity of thought, and to process situations in a more beneficial way.

Those who wait on the Lord shall renew their strength; they shall mount up with wings like eagles, they shall run and not be weary, they shall walk and not faint.—Isaiah 40:31

More in this category: « Our Constant Little White Star »