Life as a Climb 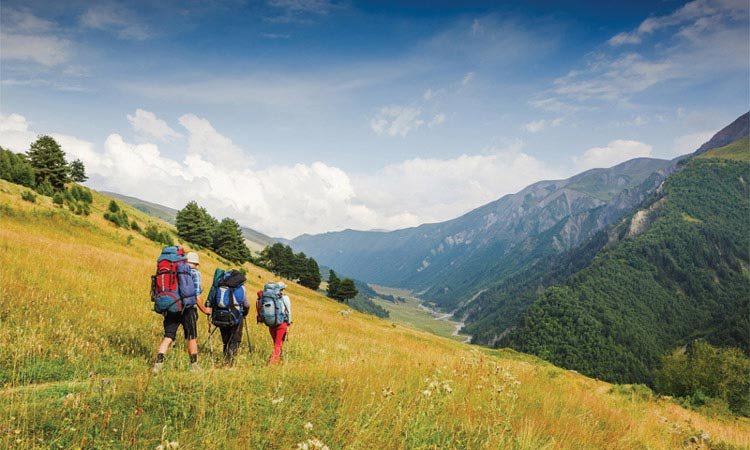 The other day, some friends took me on what I thought would be a short climb. We parked the car and took a look at the summit. We got out our climbing gear and started putting on our boots and gathering what we needed in our backpacks.

It doesn’t seem that far or that difficult. Good! I thought.

During the winter, I had suffered a knee injury and subsequently felt a bit out of shape. In any case, I was looking forward to something simple.

We started walking uphill, and it wasn’t long before my legs began to hurt and I was having a hard time breathing, but I was still hopeful it would be a short climb. Then the path changed into a rockier, winding trail. We were still surrounded by tall trees that kept us from seeing any kind of view around us. I knew we must have been making some progress, judging by the time, but it wasn’t until we came out of the woods and stopped by a gorgeous lookout point that we could actually see the progress we’d made and how far we still had to go in order to reach the top.

Those few minutes spent admiring the breathtaking view of the lake beneath us, taking a picture and a sip of water, encouraged us and gave us the feeling that we were doing well and making progress, even though the summit still seemed quite far.

Then the path turned into a genuine climb, and I could feel myself beginning to panic a little. The sky had been gathering dark clouds, and a few raindrops started falling, making the rocks slippery. We met others along the way, some experienced climbers, some attempting the hike for the first time. The uncertainty of the weather made everyone feel some trepidation. The rain didn’t last long, but the clouds remained. It wasn’t an easy climb, but the view got more intriguing and majestic over time. It definitely made it worth it all.

At one point, on a particularly difficult passage, my more experienced friend whispered in my ear, “You’re doing well, you know. There are others climbing today who are having a much harder time.” Those few words had a profound effect on me: they turned my gaze away from myself and my personal struggle. I took a look at a girl climbing for the first time, who looked worried. She was slowly making it too, helped by her friend. I smiled at her and said a few words. What a help encouragement can be: “A word fitly spoken is like apples of gold in pictures of silver.”1

And finally, the top!

There’s always something exhilarating about reaching the summit, no matter how tough the climb, but this time a magical sense of peace filled my soul and brought tears to my eyes. I was able to see the path we had taken to the top. Many turns were needed in order to get up here, and they had made the journey richer—not easier, but definitely more interesting and exciting.

On the way back down, I couldn’t help but reflect on some of the events that have taken place in my life. When you are in the thick of the forest and on a hard uphill climb, it’s often hard to make sense of things or understand where you’re standing or to gather the strength and conviction to keep going. All you can feel is the sweat, the strain, the tiredness. In that moment it’s so easy and even understandable to give up and turn back, and to be honest, a few times I have been so tempted to.

What has kept me going has been Jesus and His Word, as well as the encouragement and support of dear friends along the way.

If a bird is flying for pleasure, it flies with the wind, but if it meets danger, it turns and faces the wind, in order that it may rise higher.—Corrie ten Boom (1892–1983)

You gain strength, courage and confidence by every experience in which you really stop to look fear in the face. You must do the thing you think you cannot do.—Eleanor Roosevelt (1884–1962)

The things we try to avoid and fight against—tribulation, suffering and persecution—are the very things that produce abundant joy in us. Huge waves that would frighten the ordinary swimmer produce a tremendous thrill for the surfer who has ridden them. “We are more than conquerors through Him” in all these things—not in spite of them, but in the midst of them. A saint doesn’t know the joy of the Lord in spite of tribulation, but because of it.—Oswald Chambers (1874–1917)

More in this category: « Lighten Up Facing the Unknown—Together »