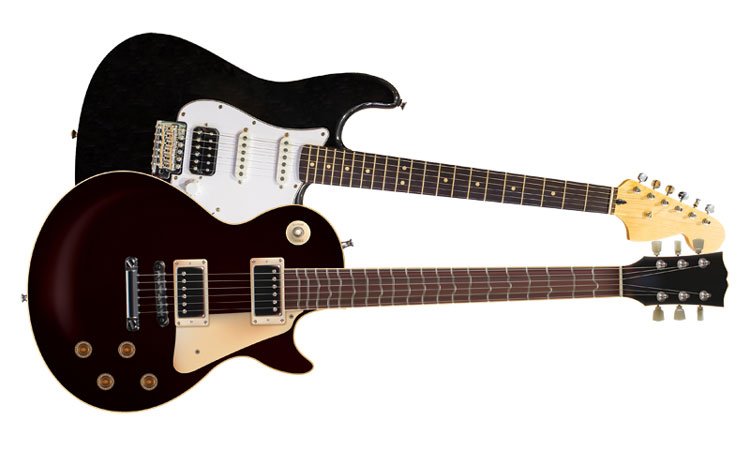 Take a close look at the two guitars pictured above. If you were a guitarist, which would you pick up to play? Probably the one on the top with the straight frets (the thin metal pieces along the fret board that the strings are pressed down onto), right? Well, you might be surprised to hear that it’s the one at the bottom that some leading guitarists say makes the best sound. Odd, isn’t it?

Experienced guitar players know that it’s actually impossible to tune even the best-quality guitars to produce perfect pitch in every note and chord everywhere along the fret board. This is because of the way that guitars have been built for hundreds of years.

In typical guitars, the traditional straight frets located along the fret board can’t produce perfect pitch. This means that even if you tune a guitar precisely to sound perfect in the chord E, it might sound out of tune while playing the chord G, or when playing the same E formation further up the fret board. This is true of other chords and notes as well. This is an annoyance that guitarists have to deal with and is one of the reasons that they often retune their guitars between songs.

Some guitarists tune some strings slightly out of tune in such a way as to strike a happy medium so that no matter what note or chord is played anywhere on the fret board, it’s close enough to perfect pitch to sound good overall. Others adjust tuning for optimum pitch for certain chord patterns that would sound out of tune for other songs with differing chord patterns.

One luthier (guitar maker) got so annoyed by constantly struggling with this inherent weakness in guitars that he decided to create a guitar that eliminated the problem altogether. The “true temperament guitar” with the crooked frets is what he came up with. He adjusted the frets by measuring precisely the position where each note has to be fretted in order to produce perfect pitch everywhere along the fret board no matter what chord is played. This led to the frets looking rather twisted or mangled. The result, however, according to users, is a guitar that “sings.”

Of what significance is this to us? At first glance, it could seem that only ignorance or incompetence would produce a guitar with such obviously misshapen frets. And yet the guitar produces a strikingly more harmonious sound than the so-called proper-looking guitar. Isn’t this so with us? The Bible tells us that what looks right and proper to the natural man might not be fit for God’s use; in fact, the opposite might be true.

With all our weaknesses and faults, we might feel imperfect and twisted like the frets of the true temperament guitar; but in the hands of the Master Musician, we can make beautiful melodies for Him. When we believe ourselves to be good and “straight” in our own righteousness, like normal guitars with their perfectly straight yet imperfect frets, our sound can actually become slightly out of harmony and dissonant, resulting in a less attractive melody.

God allows us to be as imperfect as we are for a purpose, so that we are more useful to help those around us, and He gets the glory for our harmony with His tune.

“Not by might nor by power, but by My Spirit,” says the Lord.—Zechariah 4:6

The foolishness of God is wiser than human wisdom, and the weakness of God is stronger than human strength. Brothers and sisters, think of what you were when you were called. Not many of you were wise by human standards; not many were influential; not many were of noble birth. But God chose the foolish things of the world to shame the wise; God chose the weak things of the world to shame the strong. God chose the lowly things of this world and the despised things—and the things that are not—to nullify the things that are, so that no one may boast before him.—1 Corinthians 1:25–29 NIV

We now have this light shining in our hearts, but we ourselves are like fragile clay jars containing this great treasure. This makes it clear that our great power is from God, not from ourselves.—2 Corinthians 4:7 NLT

George Sosich is a Christian missionary, musician, and writer based in Japan.

More in this category: « Let’s Make History My Three Sons »