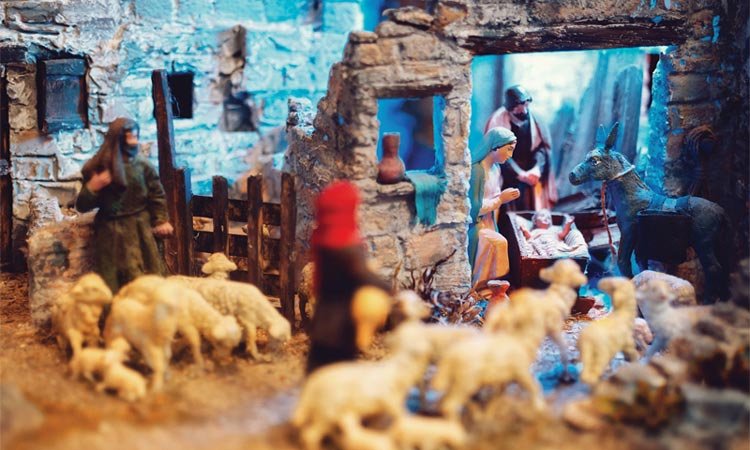 My wife has a fondness for miniature nativities, or manger scenes, as they are sometimes called. Twenty-five years ago she made small nativity figurines as gifts for her family. She sculpted them from clay, painted them at the kitchen table, and then baked them in the oven. Her sister still displays her set every Christmas.

When we lived in foreign countries as Christian volunteers, my wife began collecting small nativities made in those places. She has a Russian nativity and one from Israel, carved from olive tree wood. She has a snow globe nativity that also plays “Away in a Manger,” and some others.

Last year we saw a private collection of about 100 nativities from around the world. Among them, we saw the Holy Family depicted as African tribespeople, as Orientals, in Indian garb, and as Latin American farmers. We saw a finely detailed nativity once used in a grand cathedral in Europe. We saw a nativity made by Eskimos, in which Mary and Joseph were wearing parkas and snow boots, and one made in a South Pacific island, where the figures were dressed as the island people dress and arranged in a hut made from coconut palm fronds.

The people who made those nativities in so many different countries all had something in common. They portrayed Jesus and those at His birth like themselves, wearing their type of clothes and living as they did, relating to them in their culture and context.

In the early 1800s, before slavery was outlawed in the U.S.A., a skeptic once asked a slave, “How can you believe in Jesus and pray to the same God that your slave masters pray to?” And the slave wisely answered, “He’s not just their Jesus. He’s my Jesus too!” That slave had found Jesus and learned to draw the strength and comfort that he needed from Him.

This is still true today. Jesus relates to everyone of every race and in every land: rich and poor, rural people and city folk, the highly educated and the illiterate, the strong and the weak. He loves us all, and each of us can claim Him as our own and find in Him forgiveness of sins, salvation, and supply of our deepest needs. He’s my Jesus, and He’s your Jesus too.

Martin McTeg is a former missionary volunteer, now retired, and living in the USA.

More in this category: « Simple Joys A Life Changed »