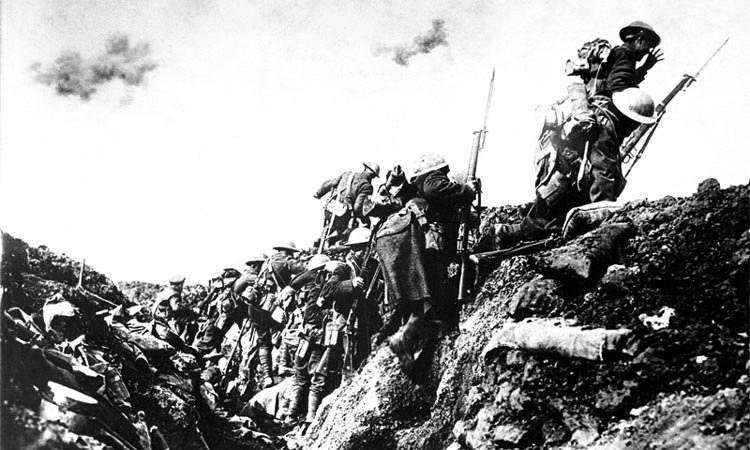 Without an enemy there can be no war.

I recently rewatched the movie Joyeux Noël (Christian Carion, 2005), which tells the story of a well-documented event that occurred on a battlefield in France on Christmas Eve, 1914.

One engagement of the Great War (WWI) involved some 3,000 soldiers from the Scottish, French, and German armies. On Christmas Eve, someone on the German side began to sing “Silent Night.” Soon a Scot’s bagpipe responded, and before long all three belligerents were singing the song in unison from the same trenches 100 meters apart where a few hours earlier they had been killing one another. What a contrast!

Coaxed into peace by the warmth of this universally loved song, the warring sides ventured out of their trenches and agreed on an unofficial truce. In some places along the line, the Christmas truce lasted for ten days. Enemies exchanged photos, addresses, chocolate, champagne, and other small gifts. They discovered that they had more in common than they realized, including a cat that wandered from side to side and made friends with everyone, which both sides claimed as their mascot.

The erstwhile enemies communicated as best they could in each other’s language. The German commander, Horstmayer, said to French Lieutenant Audebert, “When we take Paris, it will all be over. Then you can invite me up for a drink at your house in Rue Vavin!” “Don’t feel that you have to invade Paris to get a drink at my house!” Audebert replied.

The friendship that was forged between the warring sides went beyond mere pleasantries. The morning after the Christmas truce ended, each side warned the other of artillery shelling that they knew was coming from their artillery units. Their newfound sense of camaraderie was so strong that some of the soldiers were even sheltered in the opposing side’s trenches to keep them from harm.

What brought about this incredible transformation? It all started with a shared love of that beloved Christmas carol.

This incident reminds us that there is a cure to war, and that is to stop demonizing our enemies and learn to love them, as Jesus taught us to do.1 To be sure, that’s far easier said than done. But it’s not impossible. We need to learn to look beyond the external differences of race, color, creed, and ideologies and realize that everyone shares a common need—love. Everyone needs to love and be loved. If we would each make an effort to get to know others with whom we seem to have little in common, we just might find, as the soldiers on that battlefield did, that we have quite a bit more in common than we realized.

Considering that WWI lasted over three years after this incident and claimed nearly 20 million lives, and considering that many dozens of wars have been fought since then, claiming untold millions more, one might conclude that the gesture of friendship and goodwill of that Christmas Eve was in vain. The soldiers that participated were severely reprimanded. Their superiors, in an attempt to make sure that this incident would not be repeated, ordered increased shelling the next Christmas. Nevertheless, this story of peace in the midst of war lives on and continues to break down the barriers that make enemies of potential friends. Ultimately it’s a testimony to the power of God’s love, which is the essence of Christmas.

Blessed are the peacemakers, for they will be called children of God.—Matthew 5:9 NIV

Some of us … think [to] ourselves, If I had only been there! How quick I would have been to help the Baby. I would have washed His linens. How happy I would have been to go with the shepherds to see the Lord lying in the manger! Yes, we would. We say that because we know how great Christ is, but if we had been there at that time, we would have done no better than the people of Bethlehem. … Why don’t we do it now? We have Christ in our neighbor.—Martin Luther (1483–1546)

Loving God, help us to remember the birth of Jesus that we may share in the songs of the angels, the gladness of the shepherds, and the worship of the wise men. Close the door of hate and open the door of love all over the world. Let kindness come with every gift and good desires with every greeting. Deliver us from evil by the blessing which Christ brings. May our minds be filled with grateful thoughts and our hearts with forgiveness, for Jesus’ sake. Amen.—Attributed to Robert Louis Stevenson (1850–1894)

More in this category: « Christmas Shalom Do for One »