When Your Son Is Caught Sleeping 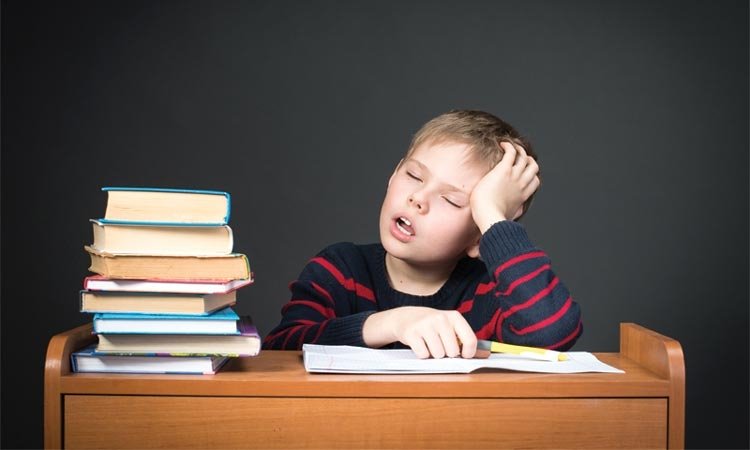 On the way home after an evening outing with some friends, I asked my youngest if he had a good time.

“Sort of,” he answered. “But the kids on the playground were teasing me.”

“About what?” I asked. He sometimes reacts strongly to comments, so I assumed it wasn’t a big deal.

“Eric said he saw a picture of me sleeping while doing homework, and then Leslie said she saw it too, and all the kids started laughing.”

I didn’t know how to respond. I had posted a photo on Facebook of my son sleeping at his desk, his homework beside him. I had thought it was cute. My son puts his all into his activities, but when he’s tired, he’s tired. And he sleeps.

It runs in my family. My siblings and I know that once we reach a certain point of fatigue, we can’t push past it. Sleep is the only solution. My son has somehow learned that early. When he’s tired, even if it’s when we’re about to sing happy birthday at a party or when he’s supposed to be finishing up his homework, he will sleep.

My husband and I understand that and work around it. Our son’s teachers, for the most part, have also been understanding that at times he might fall asleep at his desk. I try to get him to bed on time when he’ll have an early morning or a long day.

When I posted the photo, I didn’t think about the possibility of parents showing their kids the “cute” post, which in the mind of a child might not be “cute” but “silly” or “funny” or “embarrassing.” Material to tease with.

Something I had done unthinkingly caused my son hurt. It cast him in a negative light in the minds of his friends. They probably forgot about it a minute later, and they were all playing again. But that moment, I had to admit to my boy that it wasn’t their fault; it was mine.

I pulled up the Facebook photo and showed it to my son, saying, “I posted this photo of you the other day. I didn’t think anyone would tease you about it.” Then I promised, “I won’t post anything of you unless I ask you first.” I already have that agreement with other members of my immediate family, but I didn’t think it would matter to my youngest. I was wrong.

It’s strange I would make a mistake like that. Thinking back to my own childhood, my strongest emotions resulted from teasing. I can remember half a dozen separate occasions, before the age of five, where I was brought to tears by teasing. Painful moments tend to remain in the mind and the heart long after the echo of the actual words fade.

How often do my own words or side comments have the same effect as those children on the playground? When I’m trying to focus on work, and after one too many interruptions, snap at the kids, telling them to leave me alone so I can get something done. Or when they’re arguing and I can’t stand the contention, so I tell them I don’t care who said what and whose fault it is—I just want peace.

After careful reflection, I vowed to see every moment of life through the eyes of my child. That’s not a promise I can make, nor one I can keep, but it is something I can try. Not a once-and-for-all decision, but a moment-by-moment choice. To slow down. To think. To pray. To love.

To remember the words of a loving Christ who took time for the children. “Allow the children to come to me,” Jesus said. “Don’t forbid them, because the kingdom of heaven belongs to people like these children.”1

Somehow, you need to cling to your optimism. Always look for the silver lining. Always look for the best in people. Try to see things through the eyes of a child. See the wonder in the simplest things. Never stop dreaming. Believe anything is possible.—Richie Sambora (b. 1959)

If I had my child to raise all over again, I’d finger paint more, and point the finger less. I’d do less correcting, and more connecting. I’d take my eyes off my watch, and watch with my eyes. I would care to know less, and know to care more. I’d take more hikes and fly more kites. I’d stop playing serious, and seriously play. I’d run through more fields, and gaze at more stars. I’d do more hugging, and less tugging. I would be firm less often, and affirm much more. I’d build self-esteem first, and the house later. I’d teach less about the love of power, and more about the power of love.—Diana Loomans

More in this category: « Pancakes and Pudding Heaven’s Child »