Anxiety and the Deep Blue Sea 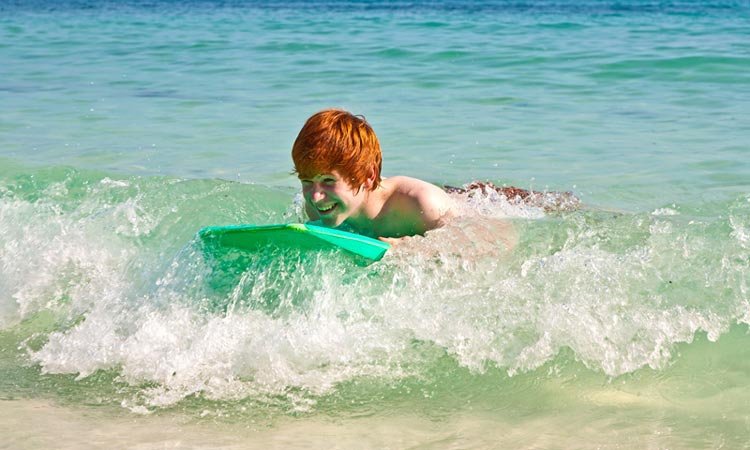 I grew up around creeks, lakes, and rivers, but when I was sixteen I went to Atlantic City, New Jersey, and saw the ocean for the first time. At the boardwalk the night we arrived, I walked out on a wooden pier. As the first thunderous waves crashed beneath my feet, I grabbed the railing, terrified. Since then I have had a cautious fondness for the ocean. I’ve never been a strong swimmer, but I love the look of the ocean, the feel of sand between my toes, and even the weightless feeling of being lifted from my feet and carried about by gentle waves—as long as I have something buoyant to hang onto.

So when we spent a summer near the beach and my two teenage sons developed a keen interest in boogie boarding, I could relate. I was happy to see them securely tethered to their boards a hundred yards out in the water, waiting for that perfect wave. But as time went on, they got more daring, insisting that the perfect wave was to be found further and further out at sea. I would sit on the shoreline watching the dots that were my sons in the midst of all that blue ocean and try to control my anxiety.

Worry seems almost a necessary part of parenting. It is a sign of love and concern. It is also a warning signal that it’s time to pray. I think worry can actually be a good thing when it causes us to channel our negative, anxious thoughts into a prayer that can help bring about a positive outcome in that situation.

It gives them a sense of security, though, to know that their parents are “on the shore,” still looking after them and still vigilant in prayer—like the time when one of my sons experienced a moment of sheer panic after a wave caught him off guard and knocked him for a loop, and the cord that tethered him to his boogie board slipped off. He thought he was going to drown, but he remembered that I was on the beach praying for him, and he called out to God himself. He knew in that instant he was going to be okay, and he was.

As my kids grow up and move away, I think it’s important that they know they have a mother who prays for them. That also reminds them to turn to God in moments of anxiety. I can’t be there to hold them up, but He can. I can’t meet all their needs or solve all their problems for them, but He can work on their behalf when they exercise their faith and pray.

An acquaintance once told me about how he had been at the beach with some friends and their kids when one of the girls was caught in a riptide. As she was being pulled out to sea, he realized she was in trouble, dove in, and began swimming out to rescue her. The current was stronger than he expected, and it took him a long time to reach her. By the time he did, she was near drowning.

He tried to help her back, but realized in one desperate moment that he was worn out and wasn’t going to make it. He called out to God, and the Lord told him to stop struggling and reach down with his foot. He found what he thought was the tip of a sandbar and managed to stay there, holding onto the girl and bobbing with the waves until a U.S. Coast Guard rescue team arrived.

When they were safely on shore, one of his rescuers said, “What I don’t understand is how you could be out there for so long, hanging onto that girl and treading water.” My friend told him about the sandbar that he could just barely reach with his legs outstretched. “I don’t know what you are talking about,” the man replied. “We know this area, and where you were the water is many meters deep. There is no sandbar.”

Even in the middle of the deep blue sea, God will give us something to plant our feet on, even if He has to create it out of nothing in answer to our earnest prayers.

Josie Clark is a blogger, mother and grandmother who is a frequent contributor to Activated.

More in this category: « Tightrope Tandem A Breath of Fresh Air »