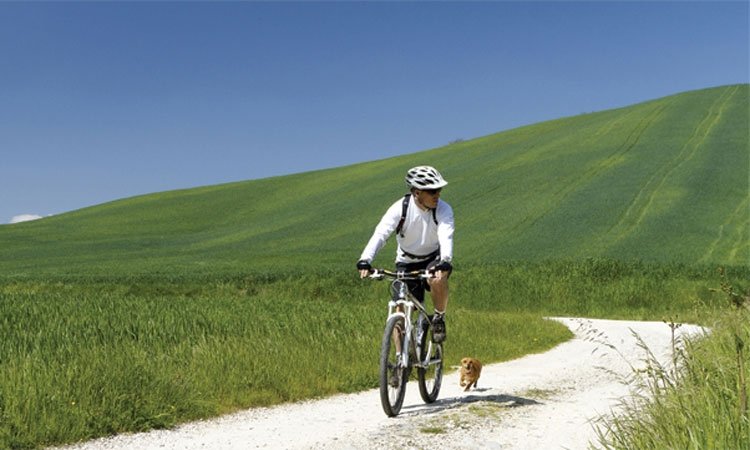 At some point in our lives, we’ve all had someone say a few words of encouragement that radically changed our day or the course of events, just because of the extra inspiration and change of perspective those words brought. Maybe we were at the end of our rope, and someone’s encouragement opened a whole new horizon of possibilities. Or maybe we’d simply had a long and tiring day, and a few cheerful words renewed our inspiration and energy.

One day my husband did an experiment that has since served as a reminder to me to be generous in passing encouragement on to others.

We were on a bike ride, following a mountain trail, and as usual we’d brought our dog Iris with us. She loves to hike in the mountains and is also a very fast runner.

As we were laboriously pedaling up the hill, she was literally running circles around us, bursting with speed and energy. On the downhill, however, she had a hard time keeping up. We were just a little faster than she, and although at first she made an effort to run alongside us, she soon got discouraged and stopped trying.

At that point the logical solution was to slow down and let her catch up with us. But before doing that, my husband said, “Let’s see what encouragement can do.” And continuing downhill he called out to Iris, “C’mon, doggie, you can do it! You’re such a fast dog, you can keep up with us! Run!”

Instantly, Iris seemed to be filled with renewed energy and speed, and she caught up with us, happy to be by our side once again. But as the words of encouragement ceased, she started losing that extra momentum and slowed down yet again. A new shower of encouragement propelled her forward once more.

Eventually, we did slow down to make it easier for her, but the experiment will forever remain in my memory as an example of the power of positive words and the difference they can make. It reminds me to try to give the gift of encouragement to those around me. It’s a simple act that can give people the boost they need to reach their full potential.

Is there a coworker or a family member with whom you are at a standstill in your relationship? Try the power of encouragement and appreciation, and you’ll see your relationship blossom with renewed energy and freshness.

Irena Žabičková is a full-time volunteer with Per un mondo migliore in Croatia and Italy.

More in this category: « Nourish and Flourish Worth Forty Thousand »